Itemized list of the improvements:
1. Elimination of white fret dots in favor of extending the fret bands on both sides.
2. Frets are extended all the way to the outer edges of the fretboard allowing for pulling the string outward to create a beautiful vibrato.
3.The ends of each fret has been patiently and meticulously filed to take the shape of tiny silver balls that sliding fingers will find to be a great delight.
4. Fret tangs are not visible but hidden and gives the impression of classiness.

Koa Pineapple Sunday. This is an Alvin “Pops” Okami UkeSA (Pops Koaloha’s new brand) version, made by Pops, himself, in Hawaii. This ukulele is NOT the imported Opio from Thailand. This is an original Pops Koa Pineapple Sunday , ebony fretboard and saddle, made to his exacting standards under the banner of his new brand, UkeSA. This one of kind  UkeSA Hawaiian Koa PIneapple Sunday version is truly a custom ukulele that Pops put a lot of thought and extra features into.

There are a few minor differences between the familiar KoAloha version and the  UkeSA Hawaiian Koa PIneapple Sunday version. They are as follows:

This ukulele comes fully warranted with a lifetime “better than the Weather” Warranty. This ukulele ships directly from the factory in Honolulu.

We are taking orders only for Pineapple Sundays. You can choose the woods, tuners, and ornamentation. Your order will be specifically for you! 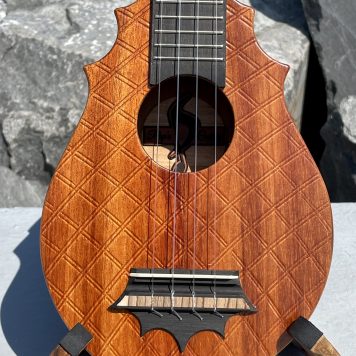