Koa Pineapple Sunday (prototype). This is an Alvin “Pops” Okami UkeSA (Pops Koaloha’s new brand) version, made by Pops, himself, in Hawaii. This ukulele is NOT the imported Opio from Thailand. This is an original Pops Pineapple Sunday with curly Koa, ebony fretboard and saddle, made to his exacting standards under the banner of his new brand, UkeSA. This one of kind  UkeSA Hawaiian Koa PIneapple Sunday version is truly a custom ukulele that Pops put a lot of thought and extra features into.

There are a few minor differences between the familiar KoAloha version and the  UkeSA Hawaiian Koa PIneapple Sunday version. They are as follows:

This ukulele comes fully warranted with a lifetime “better than the Weather” Warranty. This ukulele ships directly from the factory in Honolulu.

We are taking orders only for this ukulele. Your order will be specifically for you! 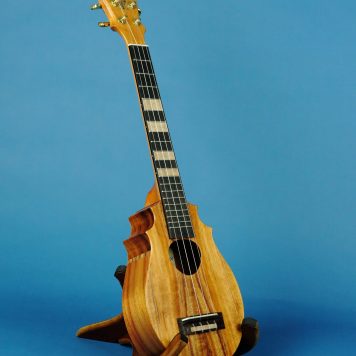