The Supa Deluxe WOW is the model where nothing is held back.
Its features are as follows:

a. Headstock differs in outline shape with a more accentuated overall outline. The inlaid Koa wood letters surround the central letter “O” which is inlaid with paua abalone to capture the immediate attention of the viewer.

b. Pegs are friction tuners with orange-colored marble textured buttons. You may upgrade to the one and only premier Gotoh Planetary Geared tuners for an additional $130. Its ease of mounting and functionality is superb. The price tag ($130 additional) is rather high but worth every penny.
c. The neck is “select” pine which was chosen because of its ability to transpose sound vibrations well down to the sound chamber.
d. The body shape echoes the Supa Wow “slant/sloped” profile but has elements of ornamentation that distinguishes and separates it from the Supa Wow. They are as follows:
1.) the body is adorned with ebony-colored edge banding along the face edges and the same treatment on the running edges of the back.
2.) the bottom of the body has an ebony band with a Koa strip running through the ebony band.
3.) the face is Engelman Spruce
4.) the back is crazy curly maple  (very hard to come by and expensive)
e.  The fretboard is ebony with Koa “fret bands” that replace the standard fret dots. This original feature makes for an easier time locating fret bars faster. The fretboard sides are lined with ebony edge banding with white dot fret position dots on the 5th, 7th, 10th, and 12th frets.
f.  The bridge is ebony with Koa strips running across at one end and the other strip running parallel through the inner lengthwise portion of the bridge. The WOW, font logo is inlaid with Paua abalone in the Koa strip that runs the length of the bridge.
This Supa Deluxe WOW is a logical result of development for the Wow ukulele. Just as there are various models of cars within the same brand, the availability of different models within the same brand is advantageous for the consumer as well as the manufacturer offering these options. 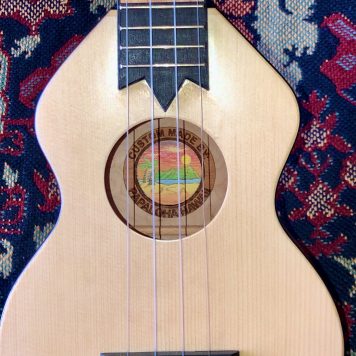