A few years ago, after discovering the incredible acoustic value of utilizing Engelman Spruce for the sound board (face), Pop’s trained professional “oboist ears” told him that this sound should be made available and affordable for anyone who wants to enjoy playing and hearing an incredible ukulele. He immediately set out on the task of creating such an ukulele.

In his hurried quest to start production, everything was kept very simple and standard. The body was a figure eight shape, the Koa fretboard was equipped with the usual fret position dots, the bridge was a rectangular shaped Koa piece and the headstock design consisted of a simple semi-rounded off top.

The logo font on the headstock was the word “Wow” done graphically with the first letter “W” in the shape of a hand gesture called “Shaka” which is a famous local hand sign. Later, the letter “H” was added for “Harmony” in honor of The Harmony Show Choir, a group of high school aged performers who took on Pop’s America’s Song in their performances.

The name of this ukulele popped into his mind as soon as he heard the volume of sound that this small standard size produced. All he could say was “Wow!” He knew that this word would be the first words out of anyone’s mouth when they played it. Despite knowing what the unanimous response would be, the curious thing about this Wow ukulele was that it never proceeded beyond the aspect of musing upon it. It wasn’t disappointing at all because other ideas soon followed and the Wow was placed on the shelf but not forgotten. We still have a limited number of Harmony “H” Wow available.

Here is a fun video for many reasons. It features, AMERICA’S SONG, which is the song that Pops asked the Harmony Show Choir to perform in concert, and then became the name of the ukulele, The Harmony Wow. Also, after the song is played, Pops talks about making the WoW, its construction and how delighted he was with the acoustics, which caused him to say, “WOW!!!” 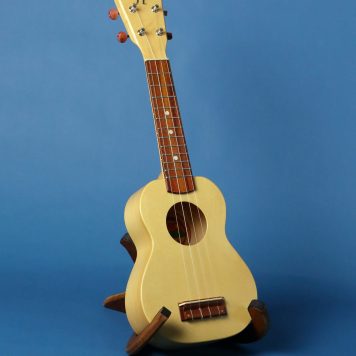